Go to the theater in order to live a virtual trip in the Greek Syracuse. Thanks to the technology the students could try out the experience of everyday life in the ancient city, for example they can admire the Apollo’s Temple and its greatness, and they will be seduced by the Syaracuse rebuilding.

The Temple of Apollo is one of the most ancient temples of the ancient Greek world, and it is certainly the most archaic between the Sicilian ones. One day the Temple with the vigor of its columns overlooked the waters of the Little Harbor, in which it mirrored at that time. A building with 42 monolithic columns, probably carried by sea, must seemed exceptional also to its builders. Live its reconstruction can’t be not exciting. 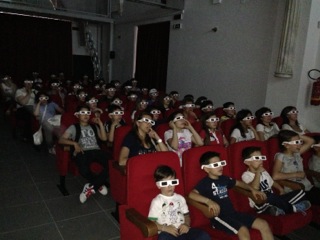 The Syaracosia was a boat projected by Archimedes and it was assembled about in the 240 a.C. by Archia from Corinth for Gerone II of Syracuse; it was 55 meters long, and it was considered one of the biggest ships of the ancient times. It could hold up 1000 tonnes, 400 soldiers and 100 passengers hosted in specific staterooms. The boat had inside a library, many bathrooms and even a chapel dedicated to Aphrodite. It was also equipped with three big masts, and the sailors in order to empty bilge water used the appropriated

The plus achieved by the reconstruction through the Computer Animation (3D) of this amazing temple, of the Avatar of Archimedes and its gigantic boat and by the rest of the Historical Narration is surely attractive for the scholastic groups who will compare themselves with this new high technologic and suggestive didactic outfit.